The Cell-graft® Vet-Line system recovers regenerative cells in the highest possible concentration while maintaining the viability of the autologous fat. 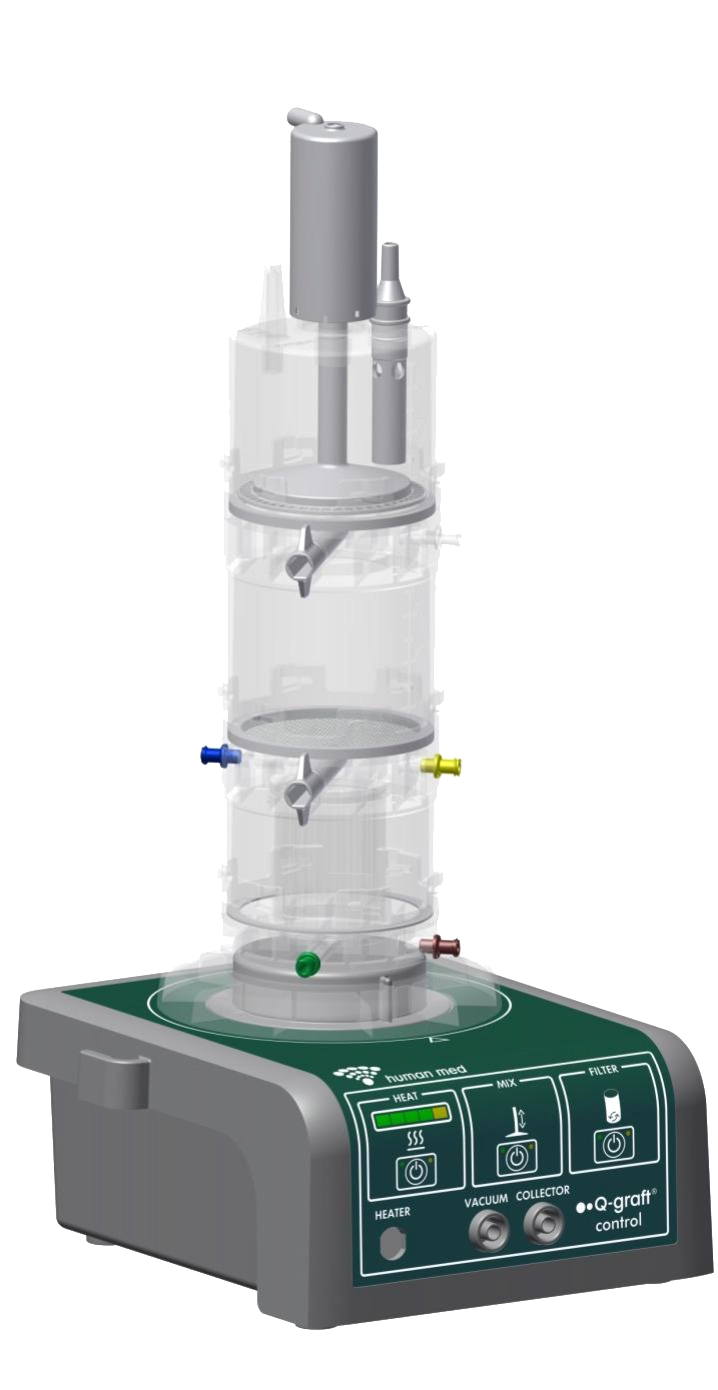 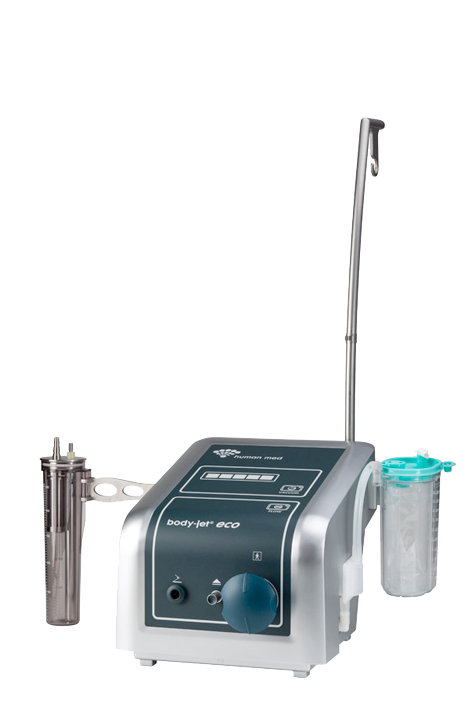 Compared to conventional therapies with cell concentrates, the CellGraft® Vet-Line method enables regenerative cells to be obtained in the shortest possible time during the procedure on site and injected at the desired location.

Development and production in Germany enable the best brand quality at the highest level.

Joint and Tendon Diseases in horses:

Wrong or poorly fitting horseshoes often cause tendon and joint diseases due to incorrect loading of the hoof capsule. 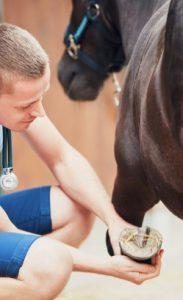 The most common painful musculoskeletal disorders include diseases and lesions of the deep and superficial flexor tendons on the torso and carpal joints. The cartilaginous structure and the bony part of the joint are just as frequently affected.

The cause of these degenerative changes is acute and unhealed joint inflammation as well as metabolic disorders and a defective position of the hooves.

In addition, postural damage is often the trigger for tendon and joint disease.
Examples for this are:

disease not only restricts your horse’s movements, it can also be very painful

When a degenerative change in the joints increasingly disturbs the movement, the diagnosis is often called osteoarthritis.

Changes can occur in every joint. This also affects its soft tissue and bone, while the articular cartilage dissolves more and more.

Also due to so-called joint chips (= splintered bone fragments with cartilage portion induced  by pressure and friction) cause pain. The lack of buffering of the cartilage leads to arthritis, the underlying bone is attacked and grows exuberantly.

In addition, due to the altered load on the joint edges, the synovial membrane, i.e. the inner layer of the joint capsule, which forms the synovial fluid, often becomes inflamed.

The localization of lameness often requires a stay of several days in an animal hospital. In this case, the affected joint is localized by means of conduction anesthesia and diagnosed with ultrasound and in part also by X-ray.

The animals therefore lame often. Noticeable is the so-called running in: The lameness decreases with increasing movement.

The 5 Types of Arthrosis

The first type occurs in young animals in joints with high mobility, especially in carpal or fetlock joints. Most of the change is preceded by an acute inflammation. Above all racehorses are affected.

The third type describes the age-related articular cartilage alteration, which is often discovered only in one section.

The fourth type includes alterations caused by previous injuries such as fractures.

In the fifth species, the articular surface of the patella is frayed. The genesis is not yet clear.

Arthrosis - its most important characteristics:

If the ankle is ossified until all the cartilage is affected, the medicine speaks of a bone spavin. The ossification can lead to acute

inflammation of the joint and almost completely paralyze its mobility. 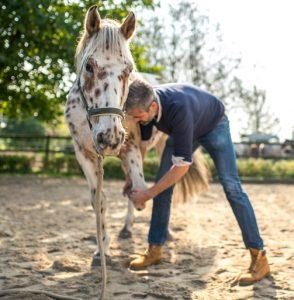 A bone spavin is recognizable by the lameness that initially only occurs when the horse starts moving and disappears while running.But there are also horses, which despite bone spavin suffer from no pain and are limited only in the movement. In general, most horses go through a painless period on a bone spavin, alternating with painful boosts as the ossification progresses again.

This is an irritation of the Periosteum, whereby new bone tissue is produced. Such bone growths – also called Schale – occur in very many horses.

A Schale is usually located on the short pastern-, coffin- and long pastern bone. It can form on all four legs, but mostly on the front legs. The medicine distinguishes between the joint-near as well as the joint Schale. The latter is far more complicated to treat, since the joint mobility is severely limited. The joint-near shell is located in the immediate proximity of the joint, which, however, is not affected itself. 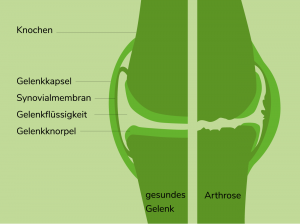 Possibilities of Medicine so far:

So far: An arthrosis cannot be cured completely – neither medically nor by natural processes. The reason is that as soon as the growth phase of the organism ends, the articular cartilage does not grow back by itself.

However, arthrosis can be treated either by conservative therapy or, if it no longer works, by surgery. Whether one way or the other – the highest priority is always the joint preservation. 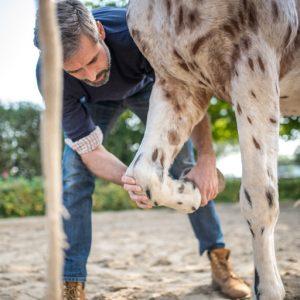 This treatment method is based on the production of proteins derived from the horse’s own blood. After taking the blood it is stored for 24 hours at a temperature of 37 ° C. This forms protein molecules for further processing. The blood serves as the basis for the retrieval of the »autologous conditioned serum«, in short ACS. This will now be injected into the affected joints or tendons. Depending on the clinical findings, the therapy includes three to five joint injections at intervals of 14 to 21 days.

In this method, a thrombocyte concentrate is first obtained from the body’s own blood of the horse by concentrating the platelets of the blood and growth-elementary-particles during different levels of centrifugation. Previously, mechanical defects must be eliminated. By injection blood cells are stimulated to release messenger substances and initiate growth factors, which lead to wound healing. The injection is done usually accompanied by an ultrasound check.

As a component of synovial fluid, hyaluronic acid acts as a lubricant during joint movement. Artificially produced, it should replace the missing body’s own synovial fluid. For this purpose, it is injected into the joint.

The result: The joint is again lubrified, irritation and inflammation are only temporarily reduced. The treatment with hyaluronic acid has to be repeated after a few months, and in the longer term, this application may become ineffective. With this method only symptoms but not the reasons are treated.

Cortisone can also be injected into the joint. This hormone can also inhibit inflammation and the associated pain. Often this is done in combination with hyaluronic acid and often has only a limited time effect.

The abbreviation MSC stands for mesenchymal stem cells. This species differentiates into cells that can form, among other things, bones, tendons and cartilage. MSC treatments develop their real effect when the cells are injected as quickly as possible. Disadvantage: The extracted material from adipose tissue or bone marrow is often injected directly into or to the defect of the tendon, while the other part is raised and preprocessed in the laboratory for about three weeks before being injected back into the injured horse. The necessary intermediate steps – including transport to the laboratory and freezing of the cells in between – lead to the fact that these are not fresh cells anymore. The two expensive treatments stress the horse considerably; Furthermore, there is a risk of contamination and inflammation. Even more risky: Already one week after an injury, the first cells of scar tissue are formed in the damaged tendon tissue. Due to the lost elasticity, the disease symptoms often return back to this exact location in a later stage.

For some years they are used for the treatment of horses: shock waves. The therapy can be performed in the clinic on a standing horse. In most cases, it will previously receive a lightly dosed tranquilizer because the shockwave device is very noisy during use. In order to achieve optimal coupling, the area of the body to be treated is shorn or shaved and provided with ultrasound gel. A treatment usually takes 15 to 20 minutes. In most cases, a repeated treatment is required at intervals of one to four weeks.

For the treatment of joint diseases, orthopedic horseshoe may be helpful.

An inflamed joint can cause free radicals, which can damage the surrounding tissue. The supply of antioxidants such as vitamins C and E and special enzymes neutralizes free radicals and prevents further damage.

Inflammation can be inhibited by drugs – or by well-tolerated joint herbs such as willow bark, elm troll, devil’s claw or ginger. Also recommended: omega-3 fatty acids from linseed oil and New Zealand green-lipped mussel. For the regeneration of articular cartilage glycosaminoglycan as well as manganese and iron play an important role. 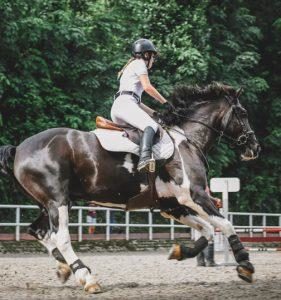 This treatment requires only a small amount of fat, which is gently removed by means of a fine jet of water and a thin cannula.

The horse is virtually painless after the procedure. Gentle removal and careful treatment enable a high concentration of vital regenerative cells.

In contrast to conventional therapies with cell concentrates, with the CellGraft® Vet-Line method cells are generated in the shortest possible time during the intervention and injected at the desired location.The regenerative cells injected in the area of the disease or injury support the regeneration and promote a recovery.

An exchange of experiences::

Since the age of 10 Alessa Hofer is firmly in the saddle. The 30-year-old doctoral student is studying veterinary medicine in Giessen and is about to graduate. In our interview, the dressage rider talks about the disease of her horse Cayenne – and how it helped him to regain his freedom of movement thanks to regenerative cell therapy.

What horse do you ride and why is it sick?

Cayenne is a 19 year old gelding and was once a teaching horse in a club. He has always jumped a lot, causing his joints were heavily loaded. Over time, Cayenne had developed tendon problems in the back legs. Three years ago, a foreign body had invaded there and formed an abscess and lymphedema. My horse was able to mount only reduced load and had to avoid subverting.

Which therapy did you choose?

I opted for regenerative cell therapy. Only one appointment for treatment was needed, and Cayenne did not have to go to the clinic either. It is a gentle variant with a minimally invasive procedure, after which at least theoretically an immediate gymnastics is possible.

How has Cayenne’s condition changed by regenerative cell therapy?

After four weeks his condition had improved significantly: Cayenne was able to regain more load, showed an improved momentum in the trot and canter, and had less relieving pressure on the hind legs when standing. After three months, his off-road capability were visibly improved. In addition, he has no more troubles when stepping under. And complex side gears such as traverses or traversals are much smoother. Even his rideability has changed completely, now again a command is enough and he follows it immediately.

Did any side effects occur during treatment?

None. Cayenne had no bleeding or scarring on the tail pulp. And he also tolerated the antibiotics very well.

“I opted for regenerative cell therapy. Only one appointment for treatment was needed, and Cayenne did not have to go to the clinic either. “ 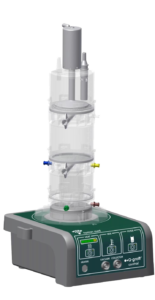 Do you want to learn more about the topic and actively promote the recovery of your horse? Then you should contact your veterinarian now. As an expert in the treatment of joint and tendon diseases. He/She is your first contact and advises you on all therapeutic options.

You are also Welcome to contact the expert team of the manufacturer to answer your questions.

We use cookies to ensure that we give you the best experience on our website. If you continue to use this site we will assume that you are happy with it.OkNoPrivacy policy
Revoke cookies